Hush Falibur and the Case of the Missing Muscle Car: Part II 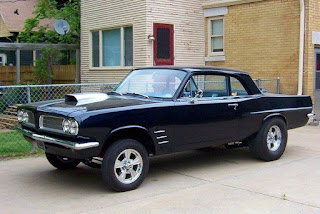 Yvon didn’t arrive to work until well after noon that day, having had to wait at his house for the police to show up and investigate the theft of his beloved Beaumont all morning. Five hours of waiting felt like a slap in the face to go with the sinking feeling in his gut he began to experience the moment he walked into his garage to find the automatic door open and his car gone.
One would think I might get special consideration, thought the superintendent. Certainly a man such as myself warrants some measure of priority, given the invaluable service I provide babysitting the scum of the earth and helping to keep the streets safe for the average taxpayer. Those policemen didn’t even know who I was, the ingrates. The police might arrest the vermin, but I’m the one who minds the rat cages. It falls to me to ensure punishment is meted out strictly and lawfully. Without me, where would those officers be? Where would our society be?
“A car like that won’t go unnoticed, Mr. Charette,” the greasy looking constable said. The one with thick black hair and olive skin. A wop or a spic by Yvon’s estimation. A visible minority, at any rate. He was forced to hire a few on at the jail himself. Canada, the superintendent thought somberly as he made his late rounds in the jail. Where everyone is equal, except some are more equal than others.
He made a quick stop in the admitting office in the basement and reviewed the inmate face sheets without acknowledging the two fat and lazy oafs in blue shirts who had toiled in the gloom of this odorous and dank dungeon for the last decade. Charette doubted the pair of them could generate enough mental energy to toast bread, and if it wasn’t for their corrupt union securing their well-paid positions he would have fired them years ago.
Like most of the other correctional officers under his command, Charette considered them useless. It was a mystery to him how the pair to get their jobs in the first place, because the superintendent wouldn’t have hired a single one of them to push a mop.
He trundled up the stairs to the jail slowly with his head hung low, wondering where his car might be and what kind of shape it was in. The greasy officer’s partner seemed a touch brighter, remarking that the lack of any commotion and the open garage door meant the thieves had some level of sophistication.
Yvon might have asked his neighbors if they heard or saw anything suspicious in the night if he were on speaking terms with the family of uppity East Indians across the street or not currently engaged in a law suit over property boundaries with the drunk newfie who lived beside him. He felt nothing but utter contempt for his vile neighbors.
After surveying the kitchen and outside worker ranges in Echo block, Yvon made his way to F area where the solitary confinement cells were located. He reviewed the clipboards beside every solid steel door before sliding the metal window plate open and peering in on the prisoner inside.
“McGonagle,” the super said as he reviewed the sheet next to Hush Falibur’s cell. The fat young guard in round wire-rimmed spectacles quickly stood up from his desk.
“Yes sir?”
“Come over here. Look at this status sheet,” Charette said as he tapped the clipboard with his index finger.
The guard complied.
“This is your handwriting and signature?”
“Yes sir,” the guard said after glancing at the board.
“Mr. McGonagle, you have perhaps the easiest job in the quietest part the entire jail this week. All you have to do is get up off your ass every fifteen minutes and observe what the inmates are doing in their seg cells, and then write what you observed down on this sheet.”
The young pudgy officer looked puzzled.
“Sir?”
“What have you written here? 12:45pm, you write: sleeping. Then at 1:00pm you wrote “ “ “  and then again at 1:15pm “ “ “  and 1:30pm “ “ “”
“Oh,” the C.O. stammered. “The quotation marks mean the prisoner’s status is unchanged.”
“I know what the fuck it means, McGonagle. I’m not a fucking imbecile.”
Charette felt his temperature rising, “Do I look like a fucking imbecile to you, Officer McGonagle?”
“N-no sir.”
“Is it so difficult for you to spell the word sleeping three times in forty-five minutes that you need to substitute it with punctuation marks?”
“No,” the guard said meekly. “No it’s not.”
“Then do not let me see it again.”
“You won’t, sir.” The officer’s face burned red with humiliation. Charette dismissed him with a grunt and a wave of his hand.